Dave Matthews is a lover, not a fighter. Yet when it comes to Big Whiskey and the GrooGrux King, he’s suddenly more pugilist than pacifist. “I keep saying, ‘I could either play you the record, or I could just punch you right in the face.’ It would be different, but there’s a similarity,” he insists. “Do you want to hear my new record, or should I just hit you?”

Any slap-happiness could prove epidemic as fans and newcomers get their hands on Dave Matthews Band’s seventh studio long-player. Although the fairy tale-sounding album title is “a mouthful,” as Matthews admits, perhaps the key part of it to keep in mind at the outset is… big. Producer Rob Cavallo, who’s working with the group for the first time, isn’t known for tiny or timid recordings—not with a recent track record that includes Green Day’s American Idiot and Kid Rock’s Rock N Roll Jesus. Any stereotypes about a stock DMB sound immediately get all shook up in the wake of the opening track, “Shake Me Like a Monkey,” which features an Earth, Wind & Fire-style horn section that can only be described as punchy. That recurrent brassiness gives way to a string section on three tracks. But the largest part of the group’s largess may come from how Matthews, traditionally an acoustic guy, has fully embraced the electric guitar—not just in his own playing but that of highly regarded axeman/pal Tim Reynolds, who’s participating in a DMB studio project for the first time in more than a decade.

Yet, for all these inescapable sonic upgrades, Big Whiskey also somehow manages to adhere closer to Dave Matthews Band’s vaunted signature sound than anything they’ve done on record since the ‘90s. “There’s a nice, sharpened edge that’s really gonna screw some heads up, because it does have more of a rock thing to it,” says drummer Carter Beauford.

True to DMB form, the album straddles a line between the celebrative and elegiac. If that dichotomy seems even more pronounced on Big Whiskey, part of that might be chalked up to the influence of New Orleans. Some of the lyrics that Matthews wrote in the final stretch, including “Alligator Pie,” allude to the beleaguered but resurgent spirit of the city where the final recording sessions took place in early 2009.

But an even greater influence on the tone of the material was the death of the group’s sax player, LeRoi Moore, who passed away following an accident in the summer of 2008. The tragedy occurred midway through the making of the album, which meant that Moore left behind a number of remarkable contributions from the early Charlottesville and Seattle sessions that were seamlessly incorporated into the final mix.

“When Roi died, it shook the whole band and left us saying: ‘What do we do now?’” says Matthews. “We knew that first of all we had to finish this record that he was already in love with. So all of us went back in with that attitude: ‘We can’t mess around with this one, because this one is an ode.’”

Matthews says that the band members had worked through some personal difficulties prior to beginning work on the album, which made it all the more important to not set aside their progress after Moore passed away. “This album is what we could have done, before,” he says, “but we hadn’t grown up enough to open up our chests to each other. We all have our own opinions and problems, but the little things didn’t matter anymore. We had this obligation to Roi, and therefore to ourselves. So I sang like I wanted the stars to be able to hear, or like I wanted the little fish at the bottom of the ocean to hear me screaming. And I think that’s how everyone approached their parts.”

When everyone initially convened with Cavallo in Charlottesville at the beginning of ’08, they arrived bearing material that they’d either been working on alone or collectively honing on the road, as is their usual practice. “We listened to it and said ‘Wow, that’s really great’—and then threw it all away,” Matthews recalls. Instead they chose to improvise in the studio. “We’re sort of labeled as a jam band—and I don’t know what that really means—but we do, having played together for so long, have an ability to read each other. So we decided we would go in and wouldn’t speak about what we were going to play, we would just do it.”

There was just one problem with that approach: it took an inordinate amount of time. Cavallo suggested they limit each improv to 10 or 15 minutes and soon they had a hundred distinct pieces of music they all agreed could form the basis of a song. In Seattle, they whittled it down to about 15 actual songs and recorded initial instrumental tracks, some of which can be heard on the finished album.

After the band’s summer 2008 tour, the surviving members reconvened in Seattle, not just to hear the melodies and lyrics Matthews was coming up with to put atop the tracks, but to comb through the riffs and solos Moore had laid down in the earlier sessions.

“There was a big effort to find passages that he had recorded and incorporate them,” recalls violin player Boyd Tinsley. “It’s so undeniably Roi, and so powerful to have him here with us for one last time on an album.”

Notes bassist Stefan Lessard, “There is a certain absence of the horn on this record, but then when the horn is there, whether it’s just him or the full section, it’s huge and powerful.”

“We’d known each other since we were four or five years old and grew up together in the same neighborhood, two doors apart,” says Beauford. “Not only did I lose a sax player and key member of the band, I lost my best friend. But you’ve got learn how to deal with it and keep moving, take what he left and use it to make the band better.”

The remaining quartet resolved not to rest on any laurels. Matthews had first tried playing electric guitar on 2001’s Everyday, but hadn’t felt completely at ease. Cavallo suggested he try one of the producer’s custom guitars – a sturdy electric with strings so heavy they resembled those typically found on an acoustic. “The next thing you know, he was playing leads,” marvels Cavallo.

Beauford might be the album’s MVP, though. “Carter played like he was trying to fight his way alone in the Alamo on this record, he was so explosive,” observes Matthews.

While the music is characterized perhaps most of all by the exuberance of the playing, the dual influences of Moore’s passing and New Orleans’ civic predicament only heightened Matthews’ preoccupations with mortality and meaning. “Spare a couple of tunes, it’s a pretty dark album, lyrically,” he acknowledges. “I don’t think that’s unusual for me. But there’s a real joy in the performance of it. You can sit in the corner and pull your hair out and weep about the state of the world, but all you’re doing is taking up space at that point. It’s far more likely that joy rather than sorrow will overcome the darkness in the world. So this is my therapy: Acknowledge the world and then make a joyful noise in protest.”

The band members have differing attitudes about how Big Whiskey will fit into their legacy—or whether they should even think about how it does. “To me,” says Boyd, “it’s more in the vein of Under the Table and Dreaming and Crash, of just music that sounds undeniably like the Dave Matthews Band.” Beauford agrees: “We were all trying to get back to the earlier days, when the music was quite raw, what people fell in love with when they heard us for the first time.”

Lessard thinks about its generational impact: “Our fans who are younger, whose parents are fans of ours, need something that they can identify with that strongly and really be like ‘This is for us.’ I feel Big Whiskey is that record.”

But Matthews eschews the slightest consideration of where fans will place Big Whiskey in the band’s canon. “All I was thinking was: Get it right.

“I love this whole process and look forward to making another one with the same get-out-of-my-face attitude that we gave this one,” he continues. Now that I’ve gotten to the other side of a process like this, I can’t make an album where I don’t demand everything from everyone and they don’t do the same. I can’t make a record that doesn’t rip my arms and legs off and pull my heart out of my chest.” After hearing Matthews describe the band’s new music as self-inflicted open-heart surgery, suddenly, experiencing it as a mere punch in the face sounds like getting off easy.

What DMB song do you most want to hear live when the world returns to “normal”? 📷 @rodrigodmbrasil https://t.co/w1s8cvYC9L 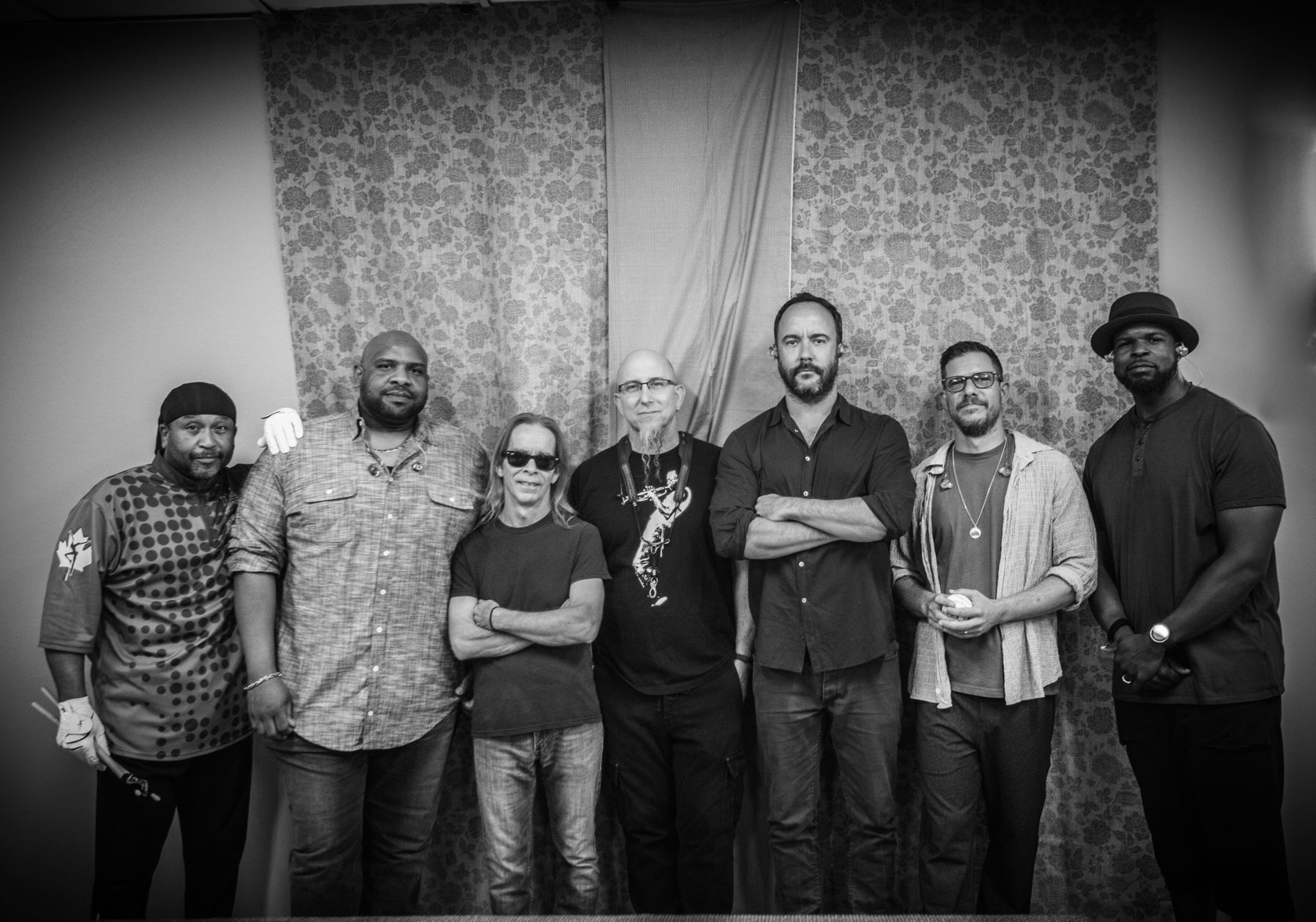