“It’s been a wild ride, that’s for sure,” admits Eli “Paperboy” Reed, looking back at the incredible journey that took the boyish-looking yet preternaturally mature soul belter from a Boston high school band room to a Mississippi Delta juke joint, from Sunday morning gigs behind the organ at a tiny South Side Chicago church to headlining the coolest clubs in Brooklyn with his red-hot band, and now, signed to Capitol Records.

On his major label debut, Come and Get It, Reed proves to be the life of a soulful, sweaty party in which everyone eventually gets dragged onto the dance floor. As a performer, Reed approaches each song with nothing less than utter conviction; he’s as authentically gritty as he is ingratiatingly sexy. Reed incorporates the feel of classic R&B and soul into a largely self-penned, 12-song set, produced with Mike Elizondo, the bassist-turned-producer whose credits include, among others, Eminem, Pink, Gwen Stefani and Fiona Apple. Admirers have likened Reed to such luminaries as Otis Redding and Wilson Pickett; the Boston Herald called him “Boston’s answer to Sam Cooke.” But he’s not merely trying to recreate a sound; Reed is channeling his influences and inspirations into making something all his own.

“For me,” says Reed, “it’s all about writing pop songs. Soul music was the greatest pop music of the 20th century and its influence is so far-reaching. When I pick up a guitar to write a song, the influence of the music I love invariably comes out. For me, that music has been completely internalized. I’m not trying to put anything on; this is what comes out, this is what happens, I can’t sing or write any other way than I do.”

“I try to write from phrases that I think people will respond to,” Reed explains. “Turns of phrase are very important to me,” a point illustrated most potently on his song “Name Calling” (lyric: “You went from name calling to calling my name”). “I’m very inspired by Sam Cooke in that way and I learned a lot from country music too. To be able to create a mental picture for someone with just one line is very, very important. Sam Cooke talks about writing from conversation, personal stories, little turns of phrase that catch your ear and you can make a hook out of. That’s my songwriting m.o..”

Most of the material on Come And Get It, Reed says, “was written at home, when I was messing around on the acoustic guitar.” The title song began quickly when Reed’s guitarist Ryan Spraker, who co-wrote several numbers, dreamed up the title phrase, “If You Want The Love of A Man, Come and Get It.” But, says Reed, “That one actually took a little while because we wanted to get the sentiment across correctly without sounding cheesy.” As for the subject matter he favors – finding, seeking and holding onto love – Reed admits ”I like writing love songs because they are easy for people to relate to and mostly it’s what I tend to understand and those are the kind of sentiments I come up with. Some of my songs come from personal experience, some of them are changed, just ideas that come to me, as most songwriting works.”

The opening track “Young Girl” is a tribute to little-known Boston soul singer Frank Lynch, who died tragically just as his career looked like it would take off with the release of this song. That’s part of Reed’s m.o. too: going back to the source of his own inspiration, finding unsung veteran artists and bringing them along with him, however he can. This past summer Reed helped organize the Brooklyn Soul Festival, featuring under-recognized soul legends like Barbara Lynn, Roscoe Robinson, and Otis Clay, in the borough he now calls home.

While he was making Come and Get It, says Reed, “I was listening to a lot of late sixties, early seventies soul music from Chicago, in particular Mel and Tim and Tyrone Davis. It’s all very lavishly produced stuff, a lot of horns, a lot of strings, but it’s also really tough, the rhythm section is always really funky. I was going for that sort of vibe. That was the plan.”

Producer Elizondo came at R&B from a markedly different angle than Reed, having deep roots in hip hop as well as contemporary rock. Says Reed, “It was definitely a different thing for him and it was a different thing for me, to work with a strong-minded producer, but it didn’t take him long to earn my respect. When we were cutting the string section he’d have the score laid out on the board, following along. He’s say, ‘measure 76, second violin, that note is flat.’ That is very impressive. Mike’s got great ideas and he’s got great ears, and he’s a great bass player. I definitely have a pop sensibility, but he brought more of an understanding of modern music.”

Even as a youngster, Reed displayed unusually sophisticated – and good – taste, working his way through his dad’s formidable record collection from the moment he learned to work a turntable. Reed absorbed early rock and roll (Chuck Berry, Buddy Holly, The Coasters) before moving on to the Country radio hits of the day. (The first record he bought was Travis Tritt and Marty Stuart’s single, “The Whiskey Ain’t Workin’” – “I still think it’s really good,” Reed interjects.) Then he fell for Howlin’ Wolf and the blues. However, the defining moment in Reed’s youthful musical education came when his dad bought Atlantic’s Ray Charles boxed set on cassette: “That was my introduction into soul music, it really changed my life. During one summer vacation, when we were in the car, we listened to those three tapes over and over again.”

Along with passing on the record-collecting bug, his dad also gave him a harmonica, the first instrument Reed learned to play. In high school, he hung out in the band room with students as passionate about music as he was: “Most of them were way better musicians than me; I wasn’t very good at the time as a guitarist. I played tenor sax, too – but I wasn’t very good at that either.” But he harbored a gift as one powerhouse singer. At a Martin Luther King Day assembly, he performed “A Change Is Gonna Come.” As he recalls, “Everyone freaked out, I got a standing ovation.”

From there, his path to a professional career was built on movie script-worthy twists and surprises. His love of the music (and a series of amazing coincidences) brought him to Clarksdale, Mississippi. After having just graduated high school at the age of 18, Reed was frequenting juke joints and lounges and playing the blues five nights a week. He found mentors among the veteran players like Terry “Big T” Williams, Sam Carr, and Wesley “Junebug” Jefferson, and honed his skills as a fledgling performer in a fertile but unforgiving environment. When he wasn’t “on” during a gig, fellow musicians and onlookers told him in no uncertain terms that he’d have to leave the stage. But the baby-faced young man from Boston had guts to match his chops: “It was hard. I had never been away from home before. I learned a lot about growing up.”

He returned north with new skills, and a new nickname – Paperboy: “I used to wear this hat, my grandfather’s hat, a newsboy hat – it’s retired now. All the musicians in Clarksdale had a nickname. They gave me that one and it stuck with me.”

Reed did subsequently try college, getting accepted into the University of Chicago, but once again, he was drawn more to music than books, hosting a well-regarded Southern Soul show on the college radio station and exploring Chicago’s south-side for records and fried chicken. Given his fascination with the lesser known but seriously influential figures in R&B, he tracked down a former Chess Records artist named Mitty Collier (“I Had a Talk With My Man Last Night”), who’d given up soul-singing for the ministry. She not only befriended Reed but hired him to play keyboards and sing at her Sunday services, paying him a small stipend that he poured back into expanding his record collection.

He returned to Boston after the school year ended, determined to put together his own band. For a time he worked for a band mate’s florist mom, using her van to transport gear as well as to deliver floral arrangements. Reed put out two very well received albums while in Boston. His first – Sings Walkin' and Talkin' and Other Smash Hits! was independently released and the follow-up Roll With You was released by Boston’s Q Division Records. In the US, Rolling Stone named Reed a “Breaking Artist,” praising his “howling grooves and dirty down home R&B.” In the UK, Reed received a nomination at the 2009 MOJO Awards for Breakthrough Artist of the Year. The thunderous buzz eventually brought him to the attention of Capitol Records.

“People say you make your own luck,” Reed concludes. “I’ve definitely made it a point to seek some of these people out who’ve inspired me, but some of the things that have happened so far have just been amazing – and I have been unbelievably lucky that they’ve happened.”

After listening to Come and Get It, it’s clear that the rest of us are about to become the lucky ones.

Come share the love this Valentine's Day with Harlem Gospel Travelers and @IkebeShakedown at @UnionPool! Tickets he… https://t.co/UW2ipfZ852 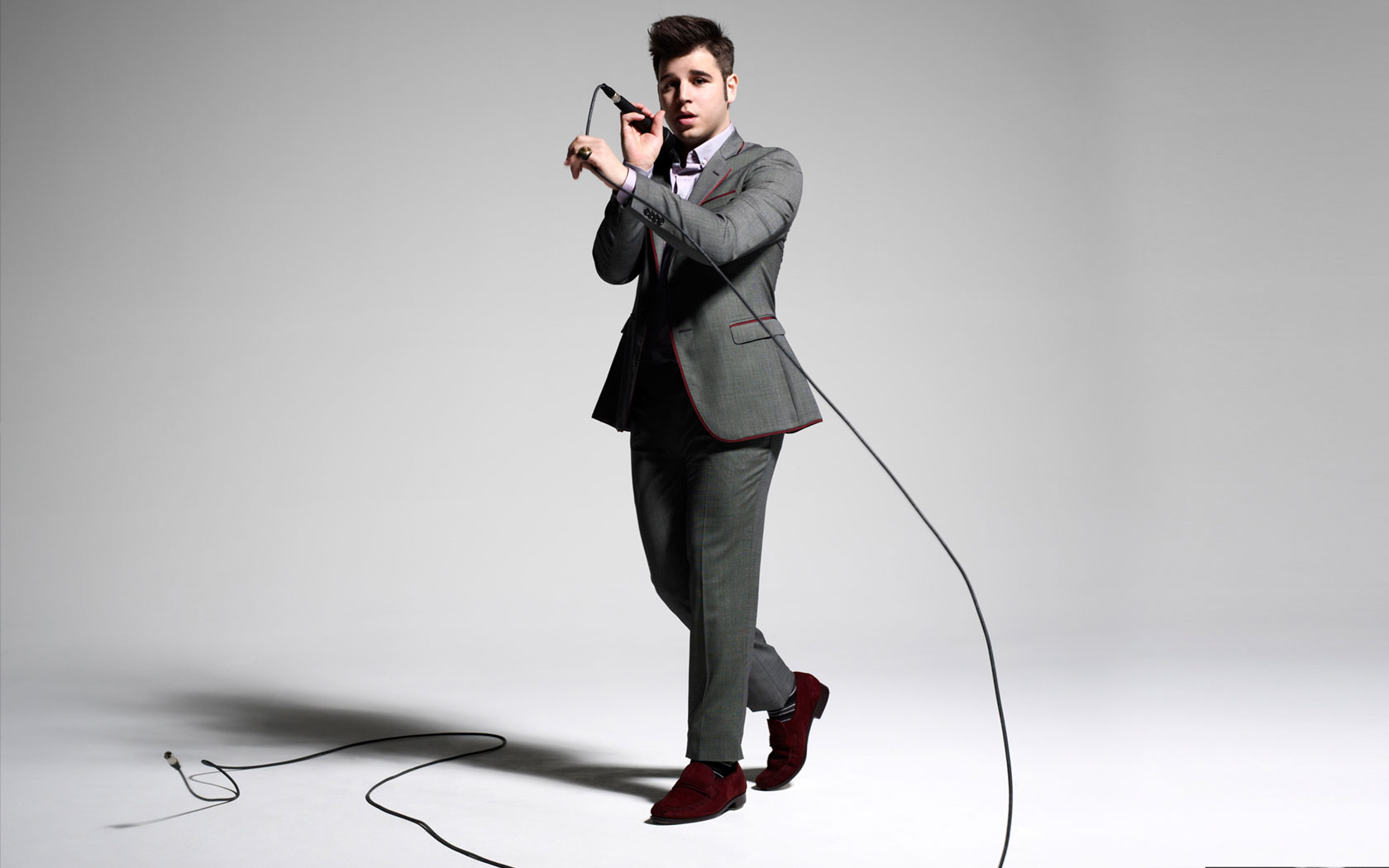