“I see the character in the song ‘Division Street’ as being at a moment where life can go a couple different ways,” says Harper Simon of the title track from his narrative-driven new album. “I think these songs tend to be like a snapshot of a character at a pivotal moment. They could go this way or that way on the metaphorical Division Street: up or down, negative or positive, to the light or to self-destruction.

“Or—like in the song ‘99’— they’re looking back at a moment they didn’t recognize as pivotal,” he says. “Because we rarely do.”

A departure from his self-titled first record, Division Street features a sound that’s much more driven by electric guitars than his alt country-flavored debut. “The mission was to make the kind of Rock ‘n’ Roll record I would want to listen to myself,” he says. “Which sounds simple but is, in fact, incredibly difficult.”

Simon co-produced Division Street with Tom Rothrock, who produced three albums for Elliott Smith (Either/Or, XO and Figure 8) and Beck’s first albumMellow Gold, among others. As the team worked, the album’s sound grew rougher around the edges. “I felt challenged and inspired by the idea of making a modern psychedelic folk-rock album, a Tom Rothrock production like XO, but then the Velvet Underground and the Stones kept entering in,” says Simon. “Elliott Smith was very influenced by the Beatles but my guitar playing is more influenced by Keith Richards. And I kept wanting to emphasize more lo-fi elements.”

The striking characters that appear in the LP’s songs are sometimes amalgamations of people Simon has known, and at other times they’re fictitious—but they’re all at a moment of personal watershed. Asked about the track “Eternal Questions,” Simon says, “Originally I was imagining this character, this guy who is bolting from rehab. And he’s in a car heading back to town. Heading back to get loaded. Because there’s something about that moment that is such a crazy energy I thought it would be interesting for a song. And I thought about him wondering who he was gonna call, what girl’s house he may crash at. What dealer he would call. Knowing he was fucking up but being beyond turning back.”

Simon’s first record featured a whole coterie of collaborators and many of its songs were co-written. The new album, however, features Simon himself more prominently, and is personally riskier for that reason. “I wrote all the music and all the lyrics, and it’s a guitar-driven record and the guitar is played by me. It’s mostly the sound of me and Pete [drummer Pete Thomas, of Elvis Costello and the Attractions] putting it down live, the two of us. Then other players, great ones, came later and overdubbed.”

“Maybe I had a lack of confidence on the first record, so I wanted the involvement of more established writers to set the bar high,” says Simon. “This time, I felt I should carry it all myself.”

Division Street took 18 months to write and record, and finishing it presented some personal challenges. “In the middle of recording, I thought I’d take a few weeks off to work on lyrics, but it turned into three months,” says Simon. “It was a very difficult time. I was suffering from deep depression and I was creeping myself out constantly. I had to go on medication eventually, which helped some. It took me three months to finally return to the studio, but by that time I had most of the lyrics.”

The album was difficult to complete, yes, but that makes some sense: as a listener, Simon is attracted to singer-songwriters whose difficult processes are evident in their work. “I like when a songwriter really goes down the rabbit hole and digs deep to come up with something powerful,” he says. “I tend to be drawn to artists with real problems—misfits and wounded animals.”

Drummer Pete Thomas was deeply involved in the album’s construction, from its earliest sessions. “I had the perfect drummer for the job in Pete Thomas,” says Simon. “I’d grown up listening to his work with Elvis Costello. Pete is very unique, I think—he has the sophistication of a first-rate session drummer, if needed, but he also has an understanding of primitive, punk drumming. And even this description of him does not do justice to his musicality.”

“I admit to having gotten a late start,” says Simon, who hopes to follow up Division Street with two more albums in quick succession. “Most people do their Rock ‘n’ Roll stuff from 25 to 35; I’m going to do it from 35 to 45. For some reason, that’s my weird fate.”

Simon’s tastes are eclectic, which might explain why this album has such a different sound from his first. “As a guitar player, I’m just as comfortable playing honky tonk or fingerpicking folk-y stuff as I am playing a Ramones riff or a Ron Asheton style solo,” he says. “I like Little Richard, the Kinks, Big Star, Hank Williams and the Pixies and Television and Muddy Waters and T Rex. I like the Who and I like X. I like it all.” 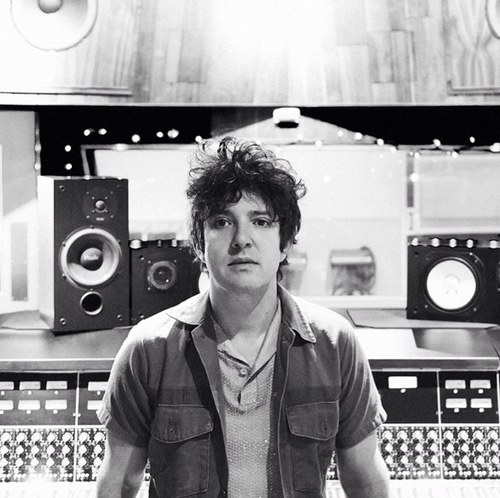