Timing, they say, is everything. However, when most bands reform there’s always a sense, deep down, that it’s a marriage of convenience. Not for Kula Shaker.

“I think what many people like about the band is that we never treated it as a career,” says Crispian Mills, contemplating the group’s long strange journey between then and now. “For us it was always a calling, and that came across at gigs. We can only do this when the timing is right.”

Kula Shaker are the last great heretics of British rock. Named after – who else? - a ninth century Indian emperor, their esoteric (Bombay) mix of psychedelic riffs, esoteric ideas and Eastern mysticism laughed in the face of Britpop orthodoxy in the 90’s.

So when, after a million selling debut (K), mind-bogglingly brilliant follow up (Peasants, Pigs & Astronauts) and a string of Top Ten singles they called it a day as the skies darkened over England during 1999’s total eclipse, it felt for fans like more than the lights going out. “I’ve got some good memories of that first run of success,” says Crispian with a smile… “We played TFI Friday with Arthur Brown. He set his head on fire and shouted 'Don't Panic, It's Just The End Of The World' in front of millions of viewers. At that point, I thought we'd done something useful with our time at the top.” “To be honest, I can't remember much about it all,” adds bassist Alonza Bevan, “But it was great to be a part of something that had such a reach and that genuinely affected people. It was also nice to get an ancient Indian hymn on Radio 1 in the UK. I can’t see that happening now.”

Whilst the band never completely went away - they played from Aberdeen to Osaka in support of 2007’s Strangefolk and 2010’s Pilgrim’s progress - there was always a sense that the quartet (now featuring keyboardist Harry Broadbent) were waiting for the stars to align once more. “When we first reformed ten years ago, we had no deal and very few people were interested,” explains Crispian with typical candour. “We’re a family more than a band and we were doing it for each other. This time there seems to be a genuine feeling that people want to see us again. Everyone has been massively positive. And this time, we’re trying to be a bit more organised.”

Bristling with energy, vitality and most importantly, killer tunes, K 2.0 is the sound of a band rebooted, re-energised and focused solely on, as Crispian puts it, "being the best we can possibly be - making music that speaks for itself". Recorded between London (State Of The Ark) and bassist Alonza's barn studio in rural Belgium, its cinematic sweep nods to everything from voodoo gospel (Love B (With U)) to Ennio Morricone (High Noon) to freak folk (33 Crows).

Twenty years on, K 2.0 it puts a mirror to the past, too. “It does feel like we’ve come full circle,” says Crispian. “(Opening track) 'Infinite Sun' is adapted from a mantra we used to busk at free festivals when we were nineteen.”

Ultimately, however, K 2.0 is the sound of Kula Shaker plugging in the amps and exhilarating in the sheer, life-affirming thrill of being in a band again. “When we’re all playing together in a room, nothing beats it,” says drummer Paul Winter Hart, recalling sweaty pre-recording rehearsals in Westbourne Grove. “We don’t go in for group hugs, but we’ve got a very English kind of camaraderie. Once the four of us are together, everything clicks.” While fans will rejoice at hearing the band back at full-tilt on rollicking good-girl-gone-bad romp 'Oh Mary', it’s climactic raga-rock epic 'Mountain Lifter' which seems set to reduce venues to rubble.

“I like the fact that when I was suggesting a cut in the arrangement, Crispian said it had to stay as it was, because that was the moment when the mountain was being lifted,” says

Alonza with a grin. “I've heard of verses, bridges, choruses, riffs and middle eights, but never the mountain lifting section...every song should have one.” Lyrically, while all the classic Kula-themes come with trademark wit - notably on greenawareness boogie 'Get Right, Get Ready' and classical allegory 'Death To Democracy' here’s also a darker side, evident in introspective mid-album ballads 'Here Come My Demons' and '33 Crows'.

“You can’t sing about hope and harmony without addressing the flip side” muses Crispian. “That said, we've always felt we’re about something more than just being in a band. It’s funny but all the things we were espousing in 1996 - yoga, chanting, vegetarianism, the environment, an emerging ‘global culture’, shared universal spiritual truths - these ideas are all out there and much more commonly accepted now, whereas back then they were still seen as slightly eccentric. The world's more connected, which can only be a good thing; especially when, as a species, we face self-extinction. But although it’s an exciting time globally, pop music seems to have lost its voice. Pop needs to take back its power.

I’m hopeful though. I’ve got kids. And ‘a change is gonna come’. Perhaps revolution is the wrong word. Rebirth may be better. Rebirth after death. And it will happen, when the time is right.”

Timing is everything. And Kula Shaker’s is better than ever.

RT @MastersStuart: She likes @kulashaker so much that she has to put her cake down to sing along! 😂 https://t.co/O71R1plU0g 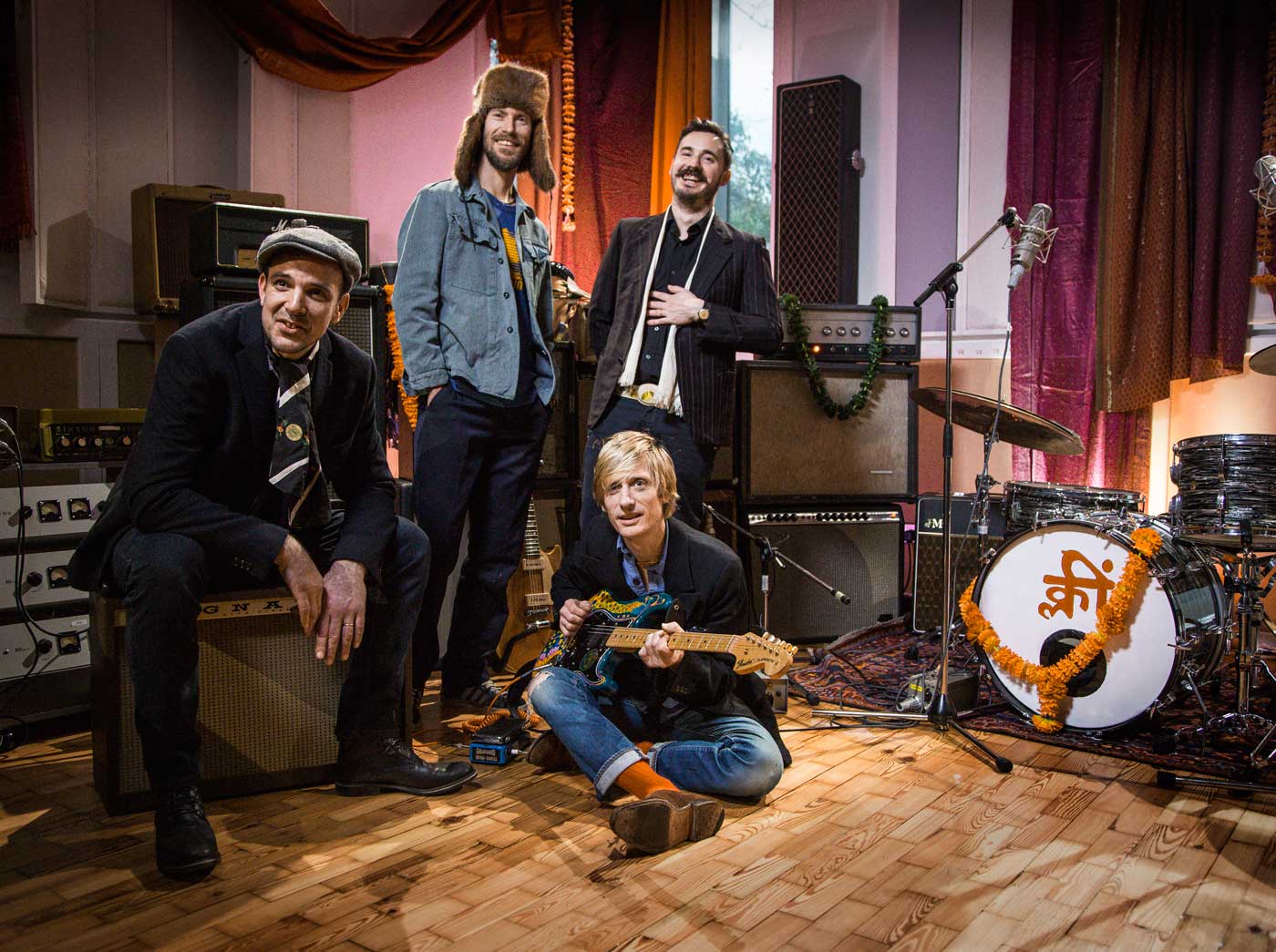