Max Cavalera is the walking embodiment of creative energy, of all of the diverse layers of urgency that are possible from that select few whose artistic output defines genres. Mystic shaman, protest singer, revolutionary hero, everyday metalhead, furious consumer of heavy music of all shades, husband, father, leader, songwriter… Cavalera reigns as the adoptive tribal chief of a generation of fans, stretching from the roughest slums of South America to the coldest confines of Russia. Anywhere that people are disenfranchised, the songs of SOULFLY serve as their anthems.

Armed with Cavalera’s four-stringed guitars, unmistakable growl and instantly recognizable riffage, the muddy tones and constant rhythmic bounce of SOULFLY has retained its gritty edge while pushing the boundaries of what’s possible in metal. »Savages« represents a career-defining moment, solidifying the lineup with longtime lead guitarist Marc Rizzo (who has been in SOULFLY almost as long as Max was in SEPULTURA), bassist Tony Campos (Static X, Ministry, Prong) and Max’s 21 year-old Zyon, who splits his time between drumming in LODY KONG and now SOULFLY.

“All of the things that make SOULFLY killer are combined in Savages,” Max declares.

»Savages« melds the most brutal, the heaviest and overall the most vibrant components that made up each record in SOULFLY’s diverse catalog. By Max’s own account, »Savages« is possessed of the tribal groove of the first two SOULFLY albums, particularly in songs like ‘Bloodshed’, ‘Ayatollah of Rock ‘N’ Rolla’ and ‘Master of Savagery’. But there’s also the thrash metal that was found on DARK AGES and OMEN; whereas the CAVALERA CONSPIRACY records contain short, punky bursts, the new SOULFLY record gets into the epic length territory of early METALLICA. The death metal vibe of SOULFLY’s »Enslaved« emerges in songs like ‘Fallen’ and ‘Cannibal Holocaust’.

“I really like the name »Savages«. I like single words that sound powerful, like ‘Primitive’, ‘Roots’, ‘Arise’,” Max explains. “It’s about the human condition right now. We have the Internet and we’re working on missions to Mars, but we are still decapitating each other and blowing up marathons. We’re still savages. Even with technology and how far we’ve come in the world, our spirit is still that of a savage.”

A trailblazing pioneer and musician with millions of albums sold who nevertheless retains boundless street cred due to his grimy, raw and undeniable authenticity; Max Cavalera is one of the most prolific artists the realm of heavy music has ever known. There’s CAVALERA CONSPIRACY, which reunited Max with his brother and former bandmate, Igor Cavalera. There was the brutal attack of NAILBOMB, Max’s collaboration with Alex Newport from FUDGE TUNNEL, which included members of DEAD KENNEDYS, FRONT LINE ASSEMBLY, BIOHAZARD and NEUROSIS on-stage. There’s his forthcoming band with members of THE DILLINGER ESCAPE PLAN, MASTODON and THE MARS VOLTA. Of course, there’s Max’s unassailable work as SEPULTURA’s founder, leading the Brazilian band from their badass lo-fi beginnings, through their era of sophisticated thrash classics, up through the cultural landmark that is ‘Roots’.

SOULFLY began almost instantaneously after his departure from the band he founded. The eponymously titled debut »Soulfly« sold over 500,000 copies in the United States alone, further expanding upon the tribal foundation of ‘Roots’ with percussive instrumentation, forays into esoteric sounds and multiple guest performers. Across the seven albums and never-ending tours that followed, Max worked with a who’s-who of the heavy music scene as band mates, guest musicians and touring members, including guys from SLIPKNOT, SLAYER, MEGADETH, DEFTONES, RADIOHEAD, STONE SOUR, CYPRESS HILL, MACHINE HEAD, DEVILDRIVER, FEAR FACTORY, MORBID ANGEL, THROWDOWN, S.O.D., SKINDRED, BORKNAGAR, WILL HAVEN and CATTLE DECAPITATION, among others.

Cavalera asked Date, who had mixed for SOULFLY in the past, to produce the new album. Once studio time with the legendary producer was on the calendar, Max kicked into high gear with the material. Max and Zyon worked on the songs that would comprise »Savages« at home. “Zyon came up to me and said, ‘Give me a shot. I’ll play on the record for you. I won’t let you down,” explains the elder Cavalera. “I went into a room with him to jam and it felt great. So I said, ‘Fuck yeah, let’s do it!”

Generally on a SOULFLY album, the drummers would learn the songs in the studio, based on demo recordings from Max. This time, Max had the luxury of working out the songs at home with Zyon. “We jammed every single day for a month. He knew 90% of the material already when we got into the studio. It reminded me of recording the old Sepultura stuff, like Arise and Chaos A.D., Igor knew exactly what he was going to do before we went into the studio. This was very similar.”

Cavalera says he must’ve written at least 1,000 riffs specifically for »Savages«. “The killer riff is what hooks the whole song together,” he says. “For me the writing process is about finding the most killer riffs possible. It's a battle; sometimes I struggle with the guitar for hours. You have to throw it down on the floor and take a break. Come back a few hours later. ‘Let’s try this again, motherfucker!’ Grab it again and go to battle, go to war with the guitar until you get the right riffs.”

Max points to BLACK SABBATH’s ‘Symptom of the Universe’ as one of the penultimate riffs of all time, citing SABBATH’s Tony Iommi and METALLICA frontman James Hetfield as among the riff-masters he most admires. “I think of riff making as an art-form. I take it really seriously. I think it deserves more attention. It has such value.”

Speaking of riffs, Rizzo came into the band a decade ago and his love of thrash metal, death metal and collaborative spirit has energized Max ever since. “When Marc entered Soulfly, it was a drastic change. He's the guitar player I've been looking for my whole life. Andreas [Kisser] and I really clicked when we worked together. I never had that again after that. We had other guys that were cool, but it was never 100% there. When Marc came in, I found it! We’ve developed a great bond since.” Rizzo particularly shines on the opening track on Savages, ‘Bloodshed.’ “There’s stuff all over the song – clean guitars, feedback – he just makes the song better.”

Campos has a lengthy resume in the world of metal and Max says they bonded over their shared Latino heritage, among other things. “I had this idea about this guy Vargas, a Venezuelan cannibal, they call him ‘El Comegente.’ He’s the Hannibal Lecter of the Andes. We both read about it. Tony sings some of it in Spanish and I sing in Portuguese. He’s a great bass player too, fucking amazing. Killer bass tones, distortion, all balls-out metal. He keeps this shit real heavy, great tone. It’s great recording with guys who know what they’re doing. I don’t have to ask if they know.”

Max acknowledges the inherent risk in putting a 21 year-old behind the kit for such an important record, but it was a risk he absolutely wanted to take. “To have my son drumming on the album, that's killer. I like risks. I like to start shit up and see what happens. Even if I fail, at least I knew I tried. Rather than knowing I didn't try at all. To me, that's the bigger failure. It took a little bit of courage to put my son on it. I came to the studio and told Terry there was a young drummer who doesn’t play to a click. Terry knew what to do and Zyon did great. The drums sound amazing.”

Like all things Max Cavalera, does SOULFLY’s »Savages is a family affair. Not only does it mark Zyon’s recorded debut with the band, but one of Max’s other kids throws down some vocals in the opening track, ‘Bloodshed’. “My son Igor has a killer punk rock voice that reminds me of the old CORROSION OF CONFORMITY days,” Max says. “The chorus has this old punk style riff, almost like a MISFITS type riff. His voice is killer.”

Like every SOULFLY album, »Savages« contains an impressive guest list comprised of veterans and up-and-comers. CLUTCH’s Neil Fallon turns up on ‘Ayatollah of Rock ‘N’ Rolla’, the title of which was inspired by Mel Gibson’s classic Mad Max 2: The Road Warrior movie. Jamie Hanks from I DECLARE WAR brought his high and low deathcore vocals to ‘Fallen’, a death metal oriented song Max says is in the vein of CANNIBAL CORPSE.

Mitch Harris from NAPALM DEATH contributed vocals to ‘K.C.S.’ Harris has been around the Cavaleras long enough that there are videos of him changing Zyon’s diapers when SOULFLY’s new drummer was just one month old. “Mitch came to the studio just to hang out during a day off from tour,” Max explains. “I'm like, ‘You ready to sing some shit on this record?’ I put him on the spot. He's like, ‘Right now?’ I said, ‘Fuck yeah, let's do it!’ There was one point where we were recording together where he did a scream and I saw his eyeball popping out of his face like a cartoon. I was like, ‘Dude that was the most metal thing I’ve seen in a long time.’”

Even as Max continues to consume new music from band like NINE INCH NAILS, MAN MUST DIE, TRIGGER THE BLOODSHED and I DECLARE WAR, even as he revisits seminal material from METALLICA, SLAYER, C.O.C. and the like, and indulges his penchant for world music, and gets his hands in his other projects and collaborations, it all adds up to a singular, distinct, straightforward and riff-heavy machine known as SOULFLY.

#SOULFLY are coming for you on our North America 2020 The Summoning Tour! Joining us will be: Toxic Holocaust​ and… https://t.co/rB7tx3l3Sc 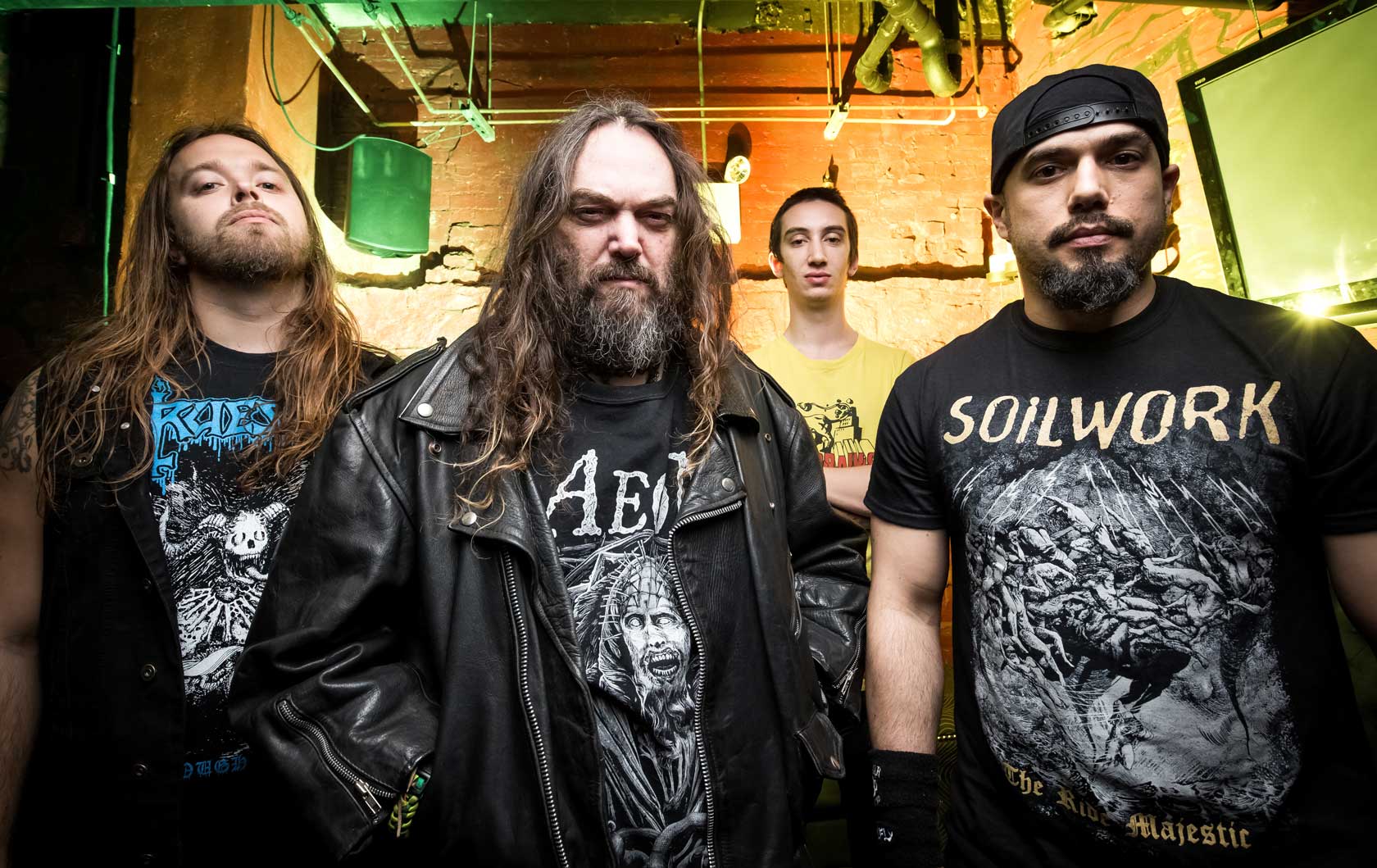