Weezer have released a new song entitled “ Feels Like Summer.” Following the band’s Grammy-nominated album Weezer (The White Album), which saw them expanding their classic

sound in bold new directions, “Feels Like Summer” is the first taste of Weezer’s forthcoming eleventh album, due for release later this year.

Weezer will be embarking on a full European tour this autumn, their first since 2005, in addition to headlining London’s prestigious Wembley Arena this October. Prior to that, the band will be playing major festivals throughout the U.S.

In 1992, Weezer had their first practice session in Los Angeles. Over the course of the next year, the group played the club scene, ultimately scoring a deal with DGC from their demo cassette.

Their debut album Weezer (aka “The Blue Album”), producer by Ric Ocasek, has been certified triple platinum in the United States, and remains the band’s all-time best seller. Upon completing the record, Weezer went on hiatus temporarily as Cuomo studied at Harvard. With help from the Spike Jonze-directed video, the single "Undone (The Sweater Song)" became a hit in the fall of 1994. But by the time the album's final single, "Say It Ain't So," was released in the summer of 1995, the group had gone on hiatus once again, with Cuomo returning to Harvard.

On September 24th 1996, Weezer's much-awaited second LP, entitled Pinkerton, was released. It was quite different from 'Weezer'; the guitars were more gruff, the lyrics were deeper and much more exposed, and the band's talent and style had matured considerably. Weezer released three singles from Pinkerton: "El Scorcho", "The Good Life", and "Pink Triangle". Pinkerton eventually went gold in record sales and has been a steady seller since.

With the producer of their debut, Ric Ocasek, again at the helm, Weezer next recorded 2001’s Weezer (aka “The Green Album”), which debuted at #4 and has since sold more than one million copies in the United States. Songs like "Hash Pipe" and "Island in the Sun" became radio and MTV staples. During their tour that summer’s tour, Shriner joined the band.

Weezer returned to the studio again to work with Rick Rubin on their fifth full-length album. Make Believe appeared in May 2005 and eventually went platinum in multiple countries. The album gave Weezer their biggest charting album peak yet, hitting #1 in Canada and #2 in the U.S. Make Believe featured the band's first two songs to top the Billboard Modern Rock Tracks chart, "Perfect Situation" and Top 10 single “Beverly Hills,” which earned the band their first Grammy nomination for Best Rock Song.

2008’s Weezer, (aka “The Red Album”) followed which featured a more collaborative approach toward songwriting and shared lead vocals on tracks. Lead single "Pork and Beans" topped the Billboard Modern Rock Tracks charts for 11 weeks, and its music video won a Grammy for Best Short Form Music Video. The Red Album debuted at #4 on the Billboard 200 upon its release.

One year later, the band returned with Raditude, which debuted as the seventh best-selling album of the week on the Billboard 200 chart. It found the band collaborating with hip-hop producer Jermaine Dupri, rapper Lil Wayne and members of The All-American Rejects.

Weezer jumped from Geffen to independent label Epitaph in 2010, debuting Hurley at #6 on the Billboard 200 to make it the band’s sixth top 10 album, as well as their sixth top 10 album in a row. The new album was quickly followed by two additional releases: an expanded deluxe edition of Pinkerton and Death to False Metal. The band then took to the road to play Pinkerton & their eponymous debut “Blue Album” in their entirety, in full a tour titled “The Memories Tour,” dubbed “Blinkerton” by fans. 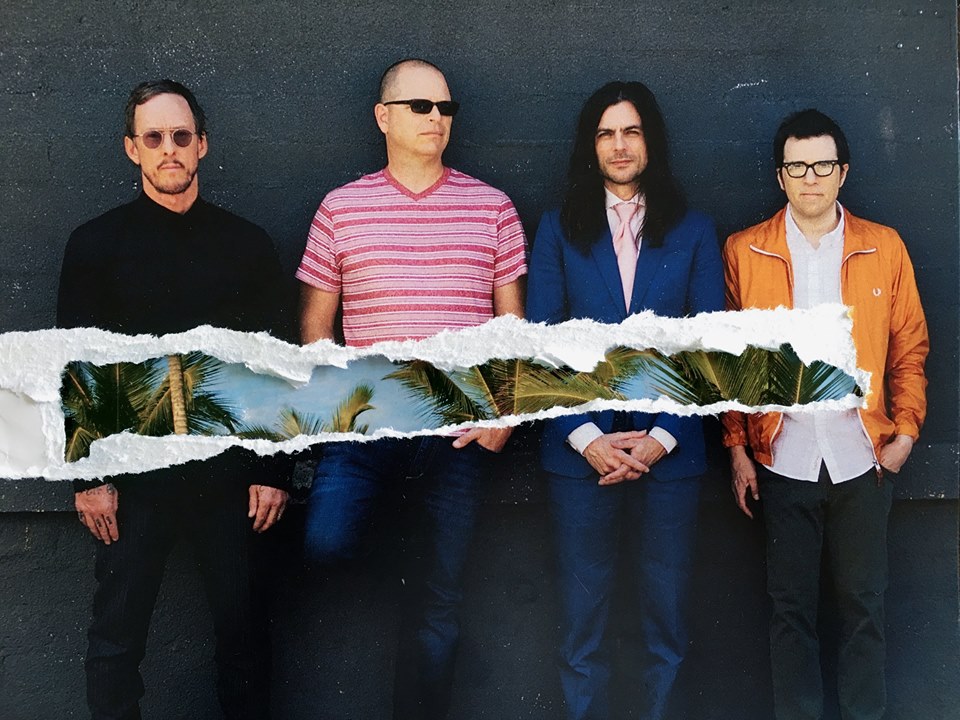